Wisconsin is known for all types of cheese, but on September 20th, it’s all about string cheese!

There's no better way to celebrate National String Cheese Day than by learning from one of Wisconsin's best cheesemakers on Fox 6 Wake Up. Brian Kramp, Fox 6 Wake Up’s host, visited Baker Cheese in St. Cloud, where four generations of cheesemakers have perfected the art of making this staple savory snack.

Here’s a review of the segments or click to watch the videos to see the full interviews.

The Origins And Evolution of Baker Cheese 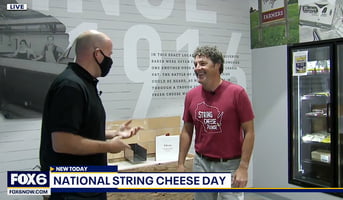 was hosted by Eric Baker, director of marketing and sales, and Brian Baker, president and CEO of Baker Cheese. They are members of the fourth generation of cheesemakers to lead the historic company that dates back to 1916. During the visit, they shared the legacy of Baker Cheese, and how it came to be what it is today.

With its exclusive focus on string cheese, Baker Cheese provides customers all over the world with all-natural, award-winning fresh string cheese. 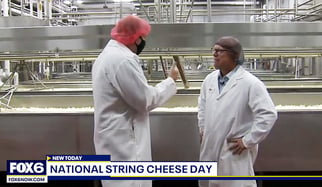 The Fox 6 tour shared the details of how string cheese is made, starting with the ingredients. You can’t make really good Wisconsin cheese without really good Wisconsin milk. In fact, Baker Cheese trucks in up to 200,000 gallons per day, and 70 million gallons per year! Both the quality and the freshness of the milk are critical, and 90% of the milk Baker Cheese uses comes from farms within a 60 mile radius of St. Cloud.

Once the milk has arrived, the interview takes you inside the production facility to see how Baker Cheese string cheese is made. 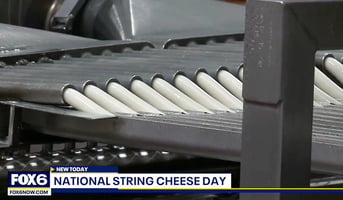 Using this method, Baker Cheese makes more than 180,000 pieces of string cheese per hour, over 3 million sticks per day, and 800 million per year—enough string cheese to go around the world two and half times!

Even with numbers this big, Baker Cheese’s passion is packing each piece of string cheese at the peak of freshness. The cheesemaking process goes quickly, with milk moving from farm to packaged cheese in only three hours.

Interested in trying it for yourself? Pick up some freshly made string cheese at the Baker Cheese Country Store, including special varieties like a customer-favorite smoked string cheese that is seldom distributed outside of Wisconsin. 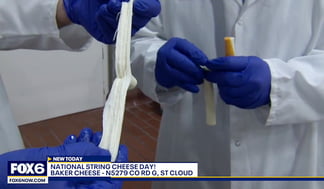 Each batch of Baker string cheese is artfully crafted to exceed customer expectations and the high quality standards the company has built over four generations. It’s the reason Baker Cheese has won national and international awards for its string cheese, with a unique profile, texture, and consistently delicious flavor.

The interview would not be complete without answering the question cheesemakers hear most! To peel or not to peel!? Baker Cheese’s response—peeling the strings is the best way to eat it!

Watch all of the segments now on Fox 6 and Happy National String Cheese Day! 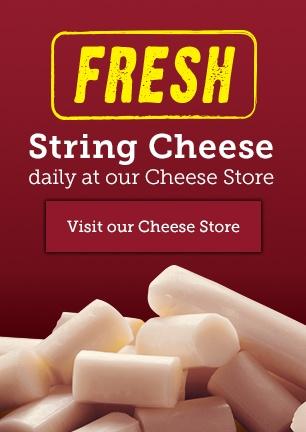